We are reviewing the Sunway Solar Car Battery Charger and detailing how it compares to some other solar car battery chargers available on the market. We are doing so for the benefit of potential users, so they may see just how it handles and stacks up against the competitors.

You never know when you might find yourself in a situation where you might be in need of a solar-powered battery charger — such as if your battery dies while you are, of course, out in the middle of nowhere or, perhaps if you are on a boat in the middle of the water. With the help of a solar-powered battery charger, you'll still be able to get back home.

This charger has something special about it that ordinary car chargers don't — it's solar-powered. So if your car battery fails on you, then you can charge it with clean, renewable solar energy.

The Sunway Solar Car Battery Charger, has amazing weather-resistance. We tested it in various conditions, including heavy rains where it was almost submerged and it still worked for us which was a pleasant surprise.

The approximate price of the Sunway Solar Car Battery Charger is just around $30 to $50  for shoppers using Amazon.

We picked a few other solar battery chargers to review against the Sunway Solar Car Battery Charger. That way, we would have a solid base of reference in order to give you an unbiased opinion on it. 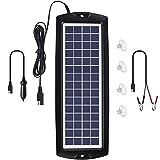 The Sunway Solar Car Battery Charger sadly is not meant for charging a completely depleted battery so it is not as efficient as some others. Instead, it is a trickle charger, meaning it is very excellent at preventing your car's battery from dying from under use.

We absolutely loved how resistant this was to the elements we subjected it to. You don't have to use it outside, and you can always just use it in your car, too. This added feature is very helpful for those of you who have batteries you don't want to die because you don't use them very frequently, whether they be on a boat, RV, golf cart, or any other vehicle.

The worst feature about this product is its warranty. The window for returning it is only a month, which for some people is nowhere near enough time to gauge whether it is defective. In the worst scenario, then, you will be out nearly $40 because you didn't notice your dissatisfaction with it within the first month of its use after purchase. 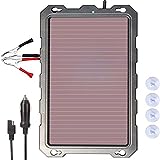 The first thing we noticed and were puzzled about this battery charger was that it reminded us a lot of a tablet in a case. Another thing we noticed was that even while it was cloudy or raining, the solar panel charger still worked. Not as well as during a clear sky naturally, but it still functioned quite well for the purpose it has.

Thankfully, this device was easy to use, just like the Sunway Solar Car Battery Charger because if you have a car with cigarette lighter ports that still turn on while the car is off, then you can have it hooked up to the port and just resting on the dashboard. If that doesn't work, then you also have the ability to run wires to the battery directly and attach it via alligator clips.

Also like the Sunway Solar Car Battery Charger, it is not meant to charge a battery after it has already died completely. Instead, it is designed to keep a battery from dying while it is not being used. That way, if you are going on a long trip, then when you return it is much more likely that your car's battery will be fine the next time you start it up.

We loved that the device can still work while it is overcast, although it may not work as well as it does while it has a clear sky. Still it functions rather well enough so that even if you live in an area that gets a lot of rain you will probably be able to come back to a vehicle with a working battery.

This warranty is not as bad as the Sunway Solar Car Battery Charger's warranty, but it is still not great. We felt that in some areas it was lacking and did not last for as long as we wanted. Thankfully, the quality of the product means we probably wouldn't be required to attempt to use the warranty. 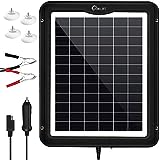 We saw that this solar car battery charger features high-impact resistant glass which makes it so that if anything within reason hits it, it should be perfectly fine. The fact that it has a 20 percent photocell conversion rate, which is rather high also impressed us, and that it has a 12-month warranty. These features, however, come with a higher price.

Just like the other 2 chargers we have reviewed, this one can charge either through the cigarette lighter port or be connected manually by running wires to the battery and connecting them via alligator clips that come with the device. Like the Sunway Solar Car Battery Charger it has a blue LED light that displays its progress in charging, with a flashing blue light meaning it is working on it.

Also like the other products on our list, this one is a solar-powered trickle charger, so it sadly is not intended to revive dead car batteries. STill it is a great way to keep a car (or other) battery unused for an extended period of time in better condition than it would without it.

This solar energy charger felt like they made it out of high quality materials when we were looking at it and testing it, and when we tested it in varying weather conditions, it survived well despite being thoroughly drenched in water and buried in snow so it can endure even during bad weather scenarios.

This device comes with a 12-month warranty, which is an improvement over the Sunway Solar Car Battery Charger's warranty of only 1 month, but you've also paid a higher price for it. Ultimately, if this product runs into problems, unlike the expected problem-free Sunway charger, then you'll be looking at the inconvenience of having to deal with running down the warranty and getting the manufacturer to honor it. 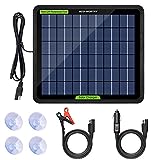 The best thing about this one is definitely the price, so if you are interested in any of these but have little money or don't want to take a risk on one of these products then this one is your best bet, it is cheap and highly versatile since it comes with suction cups that will allow it to attach to the windshield.

Another thing worth noting is that it this product is just like the other solar battery chargers except that the materials used are inferior and it does not seem to get the wattage as the manufacturer advertised.

As the other ones do, this one also uses the vehicle's cigarette lighter port. And, if that does not work while the car is turned off, then it can also be hooked up directly to the battery, placed on the dashboard. For this one, you can specifically attach it to your windshield to make the dashboard appear less cluttered.

Just like the others, this device was not engineered to revive batteries that are fully dead Instead, it is used to keep batteries from dying after a lack of use or for topping them up so the battery's life is extended.

Although this may function the same as the others on this list it takes a major hit in its design department. The manufacturer used cheaper parts, and it does not seem to reach the same amount of wattage as what the manufacturer describes it reaching.

This device comes with another warranty that is truly nothing special. But, from what we saw, it is still a little better than the Sunway Solar Car Battery Charger's warranty of just one month. It would be nice if it was a full year, but it isn't. And, for the price they are selling this charger at, we feel the chances are higher that you'll actually end up using this warranty.

After comparing the Sunway Solar Car Battery Charger to a few of its competitors on our list, we feel the Sunway product deserves at least 4 out of 5 stars with the biggest chunk being taken out because of its short warranty. Maybe they are confident you'll never need to use the warranty, but if that's the case, then the manufacturer should have no trouble in backing up their belief in a solid product.

Overall, it's a good device — still superb for its purpose and with a durable feel to it. So, we recommend purchasing the Sunway Solar Car Battery Charger.