What Is Techstream Software?

This version of Techstream software can operate on computers that have Intel or AMDB processors with 1.5 GHz or higher. The computers will also need a mouse and keyboard and RAM memory of 1 GB or higher. The computers will require a hard drive with the space of a minimum of 2 GB. The USB will have to be a 1.1 version or higher. The minimum video resolution will have to be 1024 by 600 while the recommended video resolution is 1024 by 768. Techstream software that is V8.0 and up will require a Windows 8 computer that is either 32 bit or 64 bit.

The internet software will have to be Internet Explorer 8 or later. The computer will need a software license, internal or external audio speakers, and a 10/100/1000 Mbps Ethernet network card. The sound card will have to have 1 channel audio or higher. The computer will not require a floppy drive or an optical drive. For the Toyota Information System (TIS), the computers will require Adobe systems from Adobe Flash Player 11 up as well as Java systems from Java 7 and up.

These computer requirements are numerous and specific. Considering the requirements for Techstream software that is higher than v8.0, this software does not operate with a wide range of computers. However, it is convenient to the user that the computer will not require a floppy drive or an optical drive.

It is best that the flash reprogramming process be undertaken by professional automobile technicians. The user should also know that the VIN may have to be written back into the module for some reprogramming operations.

This version of the Techstream software is free and can be downloaded from the Toyota website. It does not require Techstream activation or registration and comes with a 5000-day activation patch for all regions. Being free is one of the software’s best features and makes it an ideal alternative to other Techstream versions.

We picked a few similar products available on the market to see how they compare.

This product also provides a J1962 connector that is often used and a 22pin connector that was an old connector for Toyota vehicles. This cable tool is certified by the FCC and CE. The product can be improved by upgrading the firmware through the Internet. Users can also use the online feedback function to get technical support. This product is available from the sellers Marsrut TM and Maubhya Unstoppable. 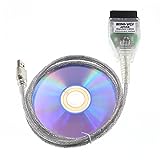 This combination of software and cable can be used with Toyota and Lexus vehicles. This firmware of this product is the 1.4.1 version. It can be used with the diagnostic processes of Toyota vehicles made since 1996. It can be operated with Windows 7, Windows 8, and Windows 10 computers. In order for the software to be installed, however, virus protectors on the computer will have to be disabled or removed. The software will require help to be updated. Remote assistance will be required for technical support for this product. This product also uses a 2.0 USB model. 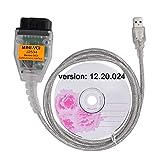 This product can be operated with the diagnostic processes of Toyota vehicles made since 1996. It can also operate with the Toyota TIS OEM diagnostic software. The firmware of this product, like the DIAGKING model, is the 1.4.1 version. If users are having problems installing the software, they can get free remote installation services from TeamViewer. The latest version of the LZLRUN model is the 12.20.024 version. 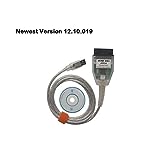 This combination of software and cable works with all the diagnostic communication protocols of Toyota vehicles made since 1996. It features an ARM CPU and an FT232RL chip. It also works with the Toyota TIS OEM diagnostic software and with Windows XP, Windows 7 32 bit, and Windows 8 32-bit computers. If users encounter installation problems with this product, they can get remote installation service from TeamViewer. Like the LZLRUN model, the latest version of this product is the 12.20.24 version. One seller that markets this product is Yueku.

What is the final rating for the Techstream Lite version of the Techstream software? The Toyota Techstream v12.10.019 software is free and is able to be used with Toyota, Lexus, and Scion vehicles that use DLC3 or J1962 functions and that have been made since 1996. However, the PC requirements for this software are numerous and specific. In addition, there is a risk of the vehicle controller being permanently damaged during the reprogramming process. Taking all these facts into consideration, this software gets a rating of 4 out of 5 stars. For more information on this site, go to scantoolcenter.com.